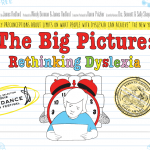 On the 1st of July you will be able to watch this ground breaking film created and directed by Robert Redford’s son James about his son who has dyslexia.  James Redford wants to bust any preconceptions about limits on what people with dyslexia can achieve.

“It is vitally important to get this message out” says James speaking from Sundance film festival  “to all those families who are supporting someone with dyslexia that this is not an academic death sentence, there is hope, a way to survive this and emerge to pursue your dreams.”

Book your tickets today at the Rosehill Theatre Whitehaven for the 1st of July at 7pm.

There will be a Q&A session after the film in the lobby and there will also be members of the West Cumbria Dyslexia Association on hand to give advice on a one to one basis.